Just before she died, my mother told me the story of her great grandmother, a remarkable woman by all accounts who lived to the grand old age of 102. She lived in the small village of Shenstone, just outside Lichfield and, judging by the warmth with which she told the story, my mum obviously remembered her with a great deal of affection.

Granny Sutton, for that was her name, was tiny in stature, spent her days dressed entirely in black and lived in a small cottage next to the old church. Almost blind, she nonetheless managed to raise a disabled daughter on her own and kept the cottage and its garden immaculate.

…Oh yes, and she also succeeded in getting herself adopted by an entire U.S. Army base!

At the proud instigation of my young mother and her brother, an American soldier from the nearby camp turned up at her cottage one afternoon to pay a visit, to be greeted with the immortal words…”Ooo, got any gum chum?”. In spite of a serious deficit of teeth (by then she was in possession of a single, solitary tooth), Granny Sutton it seems had a liking for chewing gum and was not backwards in coming forwards to ask for it. The soldier went on his way, suitably charmed, soon to be followed by others…along with a regular supply of gum, chocolate and, seemingly, anything else the old lady required. At the time, my mum mentioned a photograph that she remembered seeing in a local paper, of her gran standing next to a tank. I think she really wanted to see that picture again one last time and I spent an age trying to track it down, but to no avail.

And there this story would have ended, but for a fortuitous meeting one day last summer. I found myself talking to a genial old chap from Lichfield and mentioned in passing Granny Sutton and the elusive photo. He was as intrigued as I had been and left promising to “…see what he could do”. About a month ago I received an envelope in the post. Inside it was an article copied from a local paper recounting the sad demise of Mrs Lucy Sutton of Ivy Cottage, Shenstone. The envelope also contained a very grainy photograph of my great great grandmother standing next to a Daimler Scout Car. At the time she was 102 years old, had never been to a cinema and was reported to say that she had “…never seen anything like it before in my life”.

Sadly my mum never got to see the photo…after a lifetime of remembering it, she missed it by six months. As for Granny Sutton, well she died on the 15 April, 1945, just six weeks short of her 103 birthday. Apparently she still pottered in her garden right up to the end and used to pay regular visits to the local pub for her medicinal tot of whiskey, which according to my mum she never paid for. I’m sorry I never got to meet Granny Sutton…any woman who can scam free whiskey and a regular supply of blackmarket chocolate from the United States Army would have been a formidable weapon in any small child’s arsenal.

…I’m glad I got to see the photograph though. 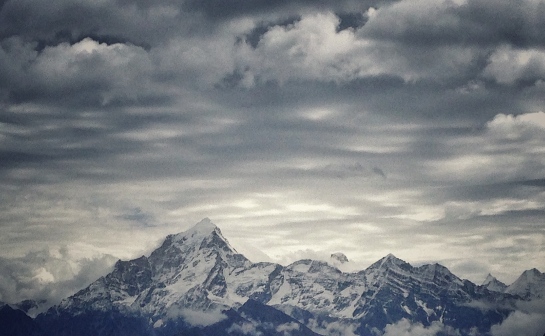 Lying in the heart of India’s snow-capped Garhwal Himalayas sits a doorway into another world. Here, along the western rim of the Nandi Devi Sanctuary, south of the Tibetan border, a high mountain pass offers us mere mortals a chance to gaze across a landscape crafted by the gods themselves…

…OK, maybe that was a bit excessive. Obviously the whole gods and other worlds bit was a touch flowery…but the doorway was true…well figuratively speaking anyway. The Kuari Pass sits amongst some of the most majestic scenery anywhere in the Indian Himalayas and from its lofty heights some of the region’s most breathtaking peaks are arrayed before you in a stupendous arc of snow and ice. From up here, the towering giants of Nandi Devi, Dunagiri and Trishul stand against a brooding sky in all their snow-capped glory.

I had intended to write a whole piece about the journey…About how we had followed a trail first blazed in 1905 by Lord Curzon, the then Viceroy of India..About how we had negotiated our way through urine soaked railway stations and along suicidal Indian roads…About how we had survived an almost biblical storm and ended up in a tented camp with full en suite facilities and an infinity pool of somewhat dubious content.

But to be honest, I can’t be bothered. So here’s some pretty pictures instead… 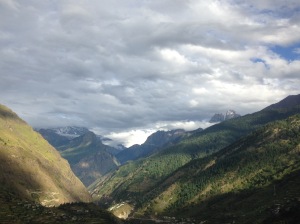 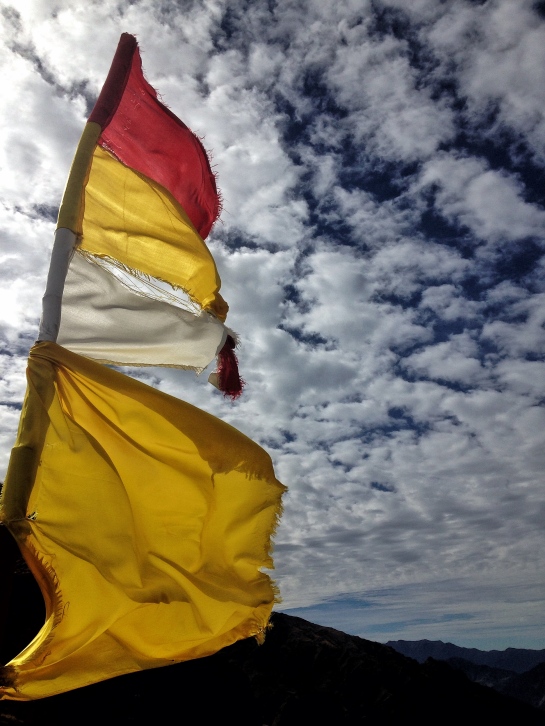 Languishing beside the shores of the Bay of Bengal, Pondicherry is a city juggling the colourful chaos of twenty-first century India with the reminders of a French colonial heritage that is still very much in evidence along its quiet, bougainvillea-lined back streets. Home to the internationally famed Sri Aurobindo Ashram and the New Age charms of Auroville, the city today presents visitors with an engaging mix of Tamil tradition, Gallic chic and Indian energy. But I wasn’t here for the sea air or the meditative calm. I wasn’t even here to engage with the ubiquitous motorbikes carrying extended families about their daily business. I had been sent to help two groups of volunteers build a school…a very special school.

The origins of the Satya Special School go back to 2003, when the story came to light of a disabled girl of 13, who was tied to a chair and locked in a badly ventilated room for eight hours a day. But this wasn’t the case of a wicked mother who took it upon herself to lock her child away from the prying eyes of an unsympathetic world. This was a case of a hard working woman who had no means of support and was forced to work all day to support herself and her daughter, forcing her to leave the girl a prisoner in her own home.

Sadly this is not a rare exception in India, the plight of the disabled across this vast country is mirrored by the case of this young girl and her mother. Children and adults alike are ignored and abused. There are estimated to be anywhere between 40 and 80 million people in India with some form of disability, with the poorest members of society worst affected due to limited resources and a lack of access to care services, education and employment. Fuelled by a desire to ‘reach the unreached’, Satya was set up to serve as an integrated centre for rehabilitation in Pondicherry, providing free rehabilitation services to the underprivileged and working tirelessly to alleviate the social stigma attached to these individuals and their families. Currently they cater for nearly 440 children with special needs, working in five different centre and operating a mobile therapy unit that covers some 44 rural communities and helps over 124 disabled children.

Their message is a simple one…”We will not change you for the world, but the world for you…”

The project that I was out here to work on was spearheaded by two remarkable women…Ms Bindu Modi, a leading child counsellor with a masters in clinical psychology and Ms Chitra Shah, a qualified social worker specialising in family and child welfare. In a country where women are often treated as second-class citizens, these two inspiring ladies were a positive beacon of hope. 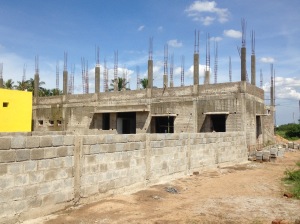 Located in the small village of Kodathur, about an hour’s drive from Pondicherry, the project was to be a new rehabilitation centre catering for up to 100 children. The village lay close to the site of a chemical factory that had been less than circumspect with its safety measures, resulting in a high instance of disabled births amongst the population. Chitra had been approached by one of the village elders, who had heard about her work with Satya, and asked if they would be interested in building a school on a site close to the village. The land was donated for free and, once funding was in place for the materials, the go ahead was given to begin the build.

And this is where I came in…or rather the two groups of volunteers from Santander and Bodyshop, who had raised the funds and were now in-country looking to put their office-based skills to good use. Under the watchful eye of myself, a local construction supervisor and a team of Indian masons and labours, we set them to work digging foundations, sifting sands, rendering walls and moving enough bricks to construct the Tower of Babel! In temperatures topping 40 Celsius, they laboured in the heat of the Indian sun. They shed blood, sweat and tears and went home with more blisters than they had probably ever had in their lives.

In a Hollywood movie, the final scene would have shown them wheeling and walking the kids into gleaming new classrooms, with walls adorned with gaily painted murals. Real life isn’t quite so choreographed though and truth be told, what they left behind still looked a lot like a building site. However, the work put in has pushed the project along massively and the projected finish date is now sometime in January of next year. 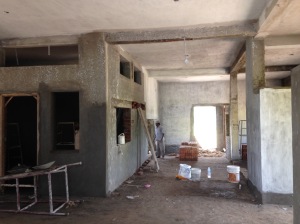 Aside from than that though, they have left behind more than just the bricks and mortar. They have left behind hope, and a realisation that the plight of the disabled in India is no longer something to be locked away in a dark, airless room, but rather something that communities can embrace and become a part of. Attitudes are changing, and we certainly saw evidence of that during our time there. We worked alongside fathers who’s children would be attending the centre. We saw with our own eyes the progress being made through physiotherapy, occupational therapy and the adaptation of dance, music and art therapy.

…And we saw the smiles of the children.

My part in this journey is over for now and my input, it has to be said, has been minimal, but as someone wiser than I once said…”Take small steps every day and one day you will get there”…

Satya’s work will continue. They will carry on trying to improve the quality of life through education, health care and rehabilitation. Their vision, to change the current fragmented system of rehabilitation and care will, hopefully, continue to change the lives of the physically and intellectually challenged for the better. And their belief in charity through dignity will, I hope, continue to eradicate the stigma attached to the disabled.

If you want to read more about Satya Special School, have a look at their website…