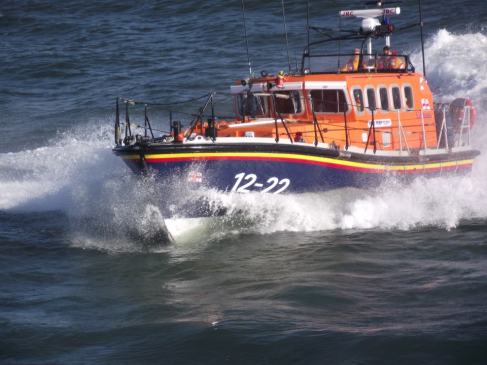 This is no time to find yourself in trouble on the Irish Sea, even during one of the best summer’s in years.

In the early hours of Saturday 27 July, the Peel Lifeboat launched into the predawn calm of what was promising to be yet another glorious day on the Isle of Man. For the families of two missing fishermen though it was to prove far from glorious. Over the course of the next 15 hours a massive air and sea search was carried out along the western and northern coasts of the island, covering an area of some 930 square kilometres. Throughout the day, four lifeboats, as well as helicopters from RAF Valley and RNAS Prestwick and a fixed wing aircraft belonging to the Maritime and Coastguard Agency combed the area in search of the two men. Their capsized boat was found relatively early on, but it took us until later that afternoon to come across the first of the bodies. We’d known once we found the boat that there was probably little chance of finding the men alive, but we knew that giving up without finding the bodies was not an option. Families just a few miles away were relying on us to bring them home. And we were determined not to let them down. It came with an almost tragic sense of relief therefore when we found the second of the two friends.

Since its foundation in 1824, the RNLI has saved over 140,000 lives in the seas off Britain and Ireland. This, unfortunately, was not to be one of those times. In spite of the tragic conclusion to the day though it did highlight one thing, that selfless sacrifice is not a thing of the past. Since the founding of the RNLI nearly 200 years ago its volunteer crews have never shirked the call to help. What these events proved though was that it isn’t just the crews that race to the call. Throughout that day the members of the Lifeboat committee also stepped up, keeping the boat and shore crews fed and watered during the day, and for that we were eternally grateful. This island has a long and proud connection with the RNLI. Its founder, Sir William Hilary lived here and it was in the storm tossed waters of the Irish Sea that the service first cut its teeth.

After the events of the past weekend, and in spite of the tragic outcome, I don’t think I have ever felt prouder to be a part of it.